What is Soya Chunks

It is also one of the great substitutes for chicken and vegetarian bodybuilders may consume it daily. But it also has some negative impact on your health, we will talk about it later in this article.

Soya chunks are really good food if your body is lacking in protein. As we know that Soya chunks are rich in protein and carbs. Now, let’s take a look at Soya Chunks nutrition value in 100 grams according to nutrela chart given below:-

We have discussed Soya Chunks nutrition value in the chart given above so let’s discuss its health benefits now. It has multiple health benefits but we will discuss some of its main benefits here:

Soya chunks are the richest source of plant protein and acc to nutrela around 100 grams of boiled soya chunks contain around 52 grams of protein. It is one of the best substitutes for chicken and eggs for vegetarians’ bodybuilders. But 100 grams is way too much to consume in 1 day.

According to guru mann it is safe to consume only half of it i.e 50 grams of soya chunks. In 50 grams you can easily get around 25 grams of protein which is a very good quantity for muscle growth from a single food.

Carbs is the main source of energy for the body and soya chunks contain a good amount of carbs. 100 grams of carbs contain almost 30 grams of carbs which is perfect from a single food if you are looking to gain muscles. You can check the number of carbs you should take in your bodybuilding goals here:- gym workout schedule for men pdf

Soya chunks are perfect for bodybuilding, especially for vegetarians. It has a good amount of protein and calcium which are necessary for muscle growth and keeps your bones healthy. But overeating it may cause some health issues. So consume it only once in a day (50 grams) to get results.

Soy chunks increase weight loss when consumed at an equal calorie level as other foods. It aids weight and fat loss by decreasing caloric intake. Soya chunks are cheaper and high nutritional food. It contains loads of fiber and around 70% of protein. It is a low-fat food and helps you feel fuller for a longer time.

Do you know that even roasted chana, sprouts and moong dal also helps in weight loss.

Now let’s check how we can consume soya chunks. How we can add it to our food and its recipes.

Here is the step by step  process to make  delicious soya  chunks salad: 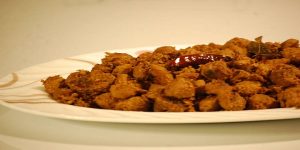 Check out the recipe of delicious roasted soya chunks:

View all posts by Medicallyinfo